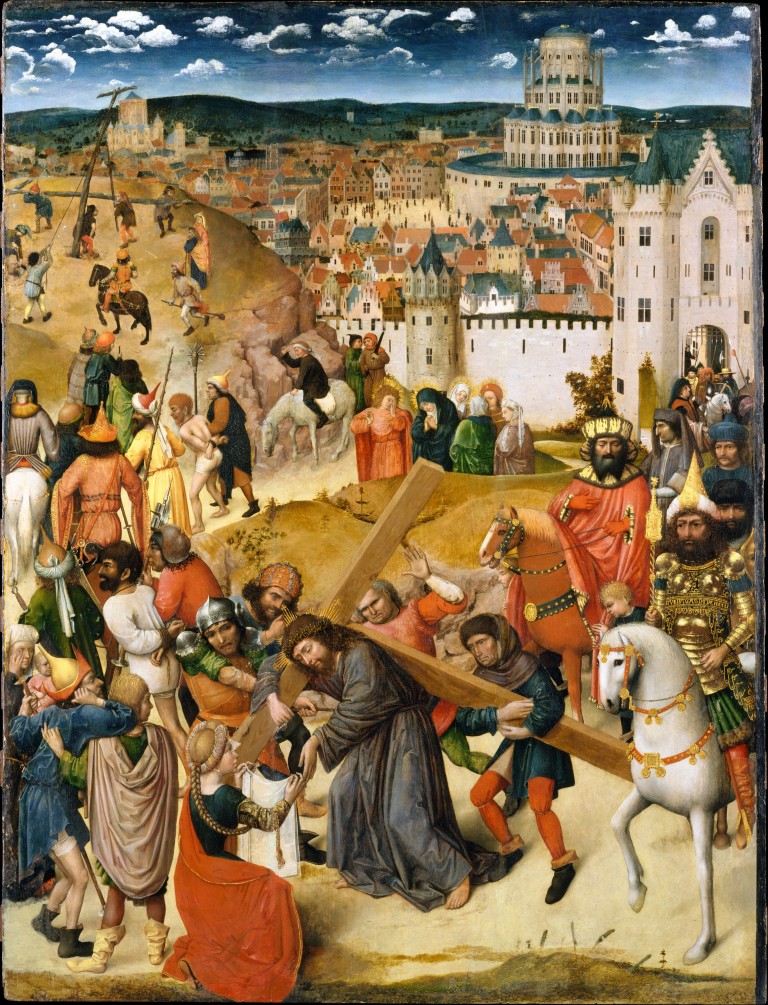 (Visual Analysis)
Christ Bearing the Cross was painted by an unknown painter from the capital city of Utrecht, Netherlands in 1470. There is evidence that this painting can be attributed to the work of an Utrecht illuminator, Master of Evert Zoudenbalch’s circle. Christ Bearing the Cross resembles manuscript illuminations linked to Jan van Eyck’s circle, Entombment and the Arrest of Christ and The Arrest of Christ from the Book of Hours (a small personal prayer book) with many shared detail figures and shapes such as patterns, costumes, and motifs. The painter portrays important figures that were narrated in the Old Testament in this painting using symbolism and by creating compassion from the viewer of Christ’s suffering. Located in the center of the painting is Christ bearing the cross up to Calvary with the aid of Simon of Cyrene, who symbolizes empathy for Christ’s suffering by bearing some of the weight of the cross. Along side Christ is Veronica, receiving the icon of the Holy Face. It is believed that in this event it imprinted the face of Christ onto her veil while she wipes Christ’s brow. Also, the Virgin Mary, Saint John, and entourage are present and waiting for Christ in the middle ground showing grief and sadness. There is a mix of expressions in the crowd surrounding Christ, either grieving at a distance or angered by Christ’s presence. A main symbolic emphasis is the man in an exotic costume wearing a yellow hat with a red underscore that symbolizes the Jews underscoring their responsibility for the Crucifixion of Christ. On the right side of the painting are men mounted on horses following the cross. These men represent the Noble brotherhood of the Holy Blood overseeing Christ’s crucifixion. The mounted man in his golden armor is carrying a staff topped by a bird which symbolizes Christ’s sacrifice and Resurrection. The man to his left in the red robe with two boys at his side appears to be of a royal personage with his entourage: Duke John of Bavaria, Count of Holland and the Prince Elector of Liege.

The painting is roughly 43 inches (107 cm) in height and 32 inches (82 cm) wide, painted with oil on a wood panel. The composition of the painting is divided into three sections; first at the bottom of the painting showing the important figures with their symbolistic attributes. At the left center of the painting is the second section creating a setting of Calvary on top of the hill outside of Jerusalem. On the right of Calvary, or the mid-right section, is the cityscape of Jerusalem with the city walls, gate house, buildings within the town including Herod’s third Temple of Solomon and a castle in the distance. The last section is at the upper part of the painting showing the lush green landscape in the far distance with hills and mountains highlighted by a haze of blue. It is carefully layered from lighter to darker contrasted with the white clouds. There are three visual distinctions of Christ Bearing the Cross that catches the viewer’s visual perception in portraying the landscape and cityscape of Jerusalem. The anonymous painter’s unique use of color, texture and shapes creates the painter’s distinctive style of this 15th century Netherlandish painting.

The use of color plays a main role in the composition of the painting which the viewer can easily identify between the narrative element of the painting; with its figures and symbolism, versus the setting of the event that furthermore enhances the narration and understanding of visual concepts of Netherlandish style land/cityscapes. The painter’s style, using lighter shade of color to its surrounding figures is commonly seen on this painting’s land/cityscape. The important figures are painted in detail with a light plain color that is contrasted by a plain but darker tone of the same color to not overshadow the main figure. The centerpiece is the event of Christ bearing the cross to Calvary not only by the directions of the figures leaning towards the hill but also the use of a lighter brown to create a path from the bottom end up towards the left center of painting. The path is furthermore enhanced by the painter’s use of a darker toned brownish color on the side of the path (above and below) up until the left center. Another flow is created at the middle path where the grieving Virgin and Saint John, with their entourage, is also painted in the same way. Thus, it creates a flow to the narrative event so the viewer’s eye can flow in the direction of where Christ will be crucified. The cityscape shows vibrant rooftops and colors to contrast between the narrative event on the bottom section, versus the setting at the top section of the painting. The wall, gate house, Herod’s third Temple of Solomon and its plaza in front is clearly lighter than its surrounding figures so that the painter can pinpoint the important settings of the event. This creates a contrast so the viewer’s eye catches these important areas of the upper section of the painting. Beyond the colorful roof and cityscape is a bright hue of green and blue of the landscape beyond the city. Again, the artist uses shade of light and dark hues of the colors to distinguish the objects of trees and hills in the horizon. However, there is an eye-catching element where the hills on the top section is painted in a similar weight of color to the small sand domes at the bottom of the painting.

The texture of the painting is clearly seen in two ways. First is the flat use of color; mentioned earlier which is either darker or lighter in color to highlight the importance of figure to create the shapes of the object. The second use is bold brush strokes to create small intricate details of the shapes such as the small plantations on the ground, to the individual trees in the distant horizon. However, the most interesting element of the painter’s brushstroke is the direction of the strokes that dictates the details of a figure. Most interesting is the roof of the oval walls of the temple in the middle of the city which is carefully textured flowing down as the tiles of the roof should be from its perspective of the oval wall. However, some areas fail to create the same effect; for example, the roof on top of the gate house shows signs that the artist attempted to create the roofing texture but instead there is an unequal distribution of color and the strokes of the brush can be easily seen. Overall, the painter use of texture creates some realism in detail, unfortunately some areas failed to do so and thus distracts the viewer from other important elements.

The shapes on the panel look stretched upwards. Perhaps the artist wanted to create a more equal composition between the narration versus city/landscape sections by taking use of the vertical panel. What seems to be the cityscape’s vanishing point is located much beyond the top of the painting instead of being on the horizon. Thus, the buildings are erected tall and stretched vertically; from the gate house upwards to the buildings after, to the center temple with its plaza, and buildings beyond ending at the grassland are painted as if the buildings are taller the further from its distance. The plaza at the center still creates space within the city area and to point the eyes upwards to the landscape further on. The most impressive element is the oval wall surrounding the center temple because it is nearly a perfect shape for its perspective. The artist clearly shows understanding of the use of space and shapes within the vertical panel to create an illusion of a massive majestic landscape in the distance. The most eye catching is the sky with the use of white and gentle curves and lines to create a soft texture, similar to what the viewer’s conscious understanding of what clouds should be.

In conclusion, the artist had a clear visual plan and understanding of the use of space on the vertical panel. By use of color tones and hues, the painting’s main composition can be divided into three sections: the narrative event on the bottom half, the stretched cityscape and finally, the landscape with lush blue skies on the upper section on the painting. The trend of this painting is to highlight important figures apart from the background by using a lighter tone of the same color of its surrounding so it creates dimension so the viewer can easily distinguish the figure. There are unique uses of brushstrokes to create texture, but unfortunately some brushstrokes fail to depict the same elements as the others. Thus, it distracts the viewer’s focus on these brushstrokes rather than on the figure itself. Fortunately, the use of shapes in the space creates another flow of the vertical panel so that they not only focus on the narrative areas or the small details at the bottom section, but they sweep the attention upwards to the cityscape and landscape with the aid of shapes and textures uniquely to this artist. Nonetheless, the upper section of the painting complements the narrative event of Christ bearing the cross because it further adds narrative story to the painting. It enhances the composition of the lower section and is somewhat symbolic. The dry and desolated clutter along with the mixed emotions while Christ is bearing the cross invokes a depressing aspect of the Christ’s suffering. However, the cityscape in the distance shows some of the clutters of human civilization still in development on what is a pure and simple, yet beautiful lush, landscape which God has created.